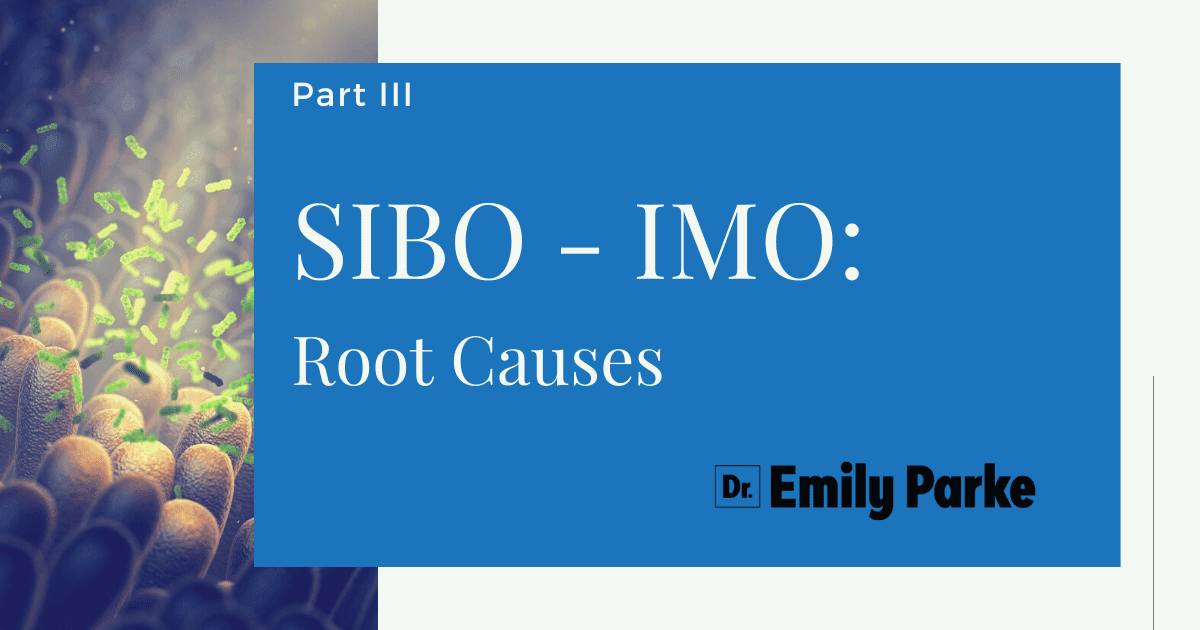 Hi, this is Dr. Emily Parke with your next Functional Health Minute.

I’d like to continue on talking about SIBO/IMO and some of the root causes as to why someone might actually get SIBO or IMO. So, of course, in one of the previous videos, I talked about that IBS smart test, which is a blood test to look and see if your SIBO or IMO started after you’ve had food poisoning. So, we do know that’s very clear if you get a food poisoning, it’s enough to obviously upset the balance, the microbiome balance, specifically, in your gut, and trigger an autoimmune like process that creates antibodies against specifically the nervous system in the small intestine, which then in turn slows down motility, which then in turn allows bacteria and/or archaea to overgrow. And then that’s what creates the SIBO or IMO.

So that’s one way you can get SIBO. Another way that you can that’s a common cause of it is treatment with antibiotics. And it’s not to say antibiotics are bad. If you get an acute infection, you need to take it. You have a strep throat, you have an awful skin infection–you have to take antibiotics to get that acute infection cleared up in a lot of cases. That’s okay. But that antibiotic may kill off specific bacteria that allow other less healthy bacteria to overgrow or archaea to overgrow. And then, that can kind of get the SIBO process started. So, antibiotics is a cause.

There are a couple other medications that can contribute to SIBO. Steroids and proton pump inhibitors, or acid blockers. But I will tell you the data’s pretty clear, not every patient on a PPI is going to get SIBO, or every patient that’s taken steroids is going to get SIBO. It’s just one of the factors we look at. It is way more likely with someone that does a course of antibiotics to get SIBO or IMO.

So far we’ve got food poisoning, and you can get it from medications, like antibiotics, less likely steroids and/or proton pump inhibitors. And then, there are also anatomical things that can happen as well. And so, that’s related to what’s going on in the abdomen as far as have you had surgery there? Did you have your gallbladder out? Have you had abdominal surgeries? Have you had a portion of your small intestine removed, have you had a C-section, or pelvic surgery?

Basically, if you had pelvic or abdominal surgery, what can happen, and again it doesn’t happen 100% of the time, most people have their surgeries, they recover great, all good. But what can happen is these adhesions can form after surgery. And adhesions are these like sticky rubber bands that form between organs that are in the abdomen. So, it can form between organs and it can form between an organ in the abdominal wall as well. So, it can form between the smell of intestine and the abdominal wall. Or the small intestine and another piece of small intestine, et cetera, et cetera. So, these adhesions create these restrictive bands that don’t allow peristalsis, or regular healthy motility to occur in the small intestine, especially. And when that happens, if you think about it logically, you’re going to have the food that’s supposed to move through your small intestine at a certain rate, at a certain motility speed is going to get slowed down. And that will allow the bacteria or archaea to ferment basically, and overgrow. And then, that can contribute to a SIBO/IMO situation.

Aside from that, another abdominal and pelvic cause can just be congestion as in the lymphatic drainage, or the venous drainage is not optimal. And things are kind of swollen. You get some edema there, and then that can slow things down as well.

So, if we talk about what to do as far as treatment, of course, we want to kill the overgrown bacteria or archaea. And we may do that by starving them out with the elemental diet. We may do that with prescription antibiotics. And there are certain antibiotics like Rifaximin, for example, that has a really good track record for SIBO and IMO, usually paired with a second antibiotic, depending on whether we’re talking about hydrogens or methane. And then, there’s lots of different herbal antimicrobial protocols that include other things for support, of course.

So, I just want to kind of review the different risk factors/ways that you can get SIBO/IMO. And if you are struggling with IBS symptoms and you really don’t understand why, I would highly recommend going to see a functional medicine provider, because there is some really good data to support that. A good majority of IBS patients actually have SIBO or IMO. Of course, in the functional medicine world, there’s lots of other reasons for IBS symptoms. We look at things like food allergies, food sensitivities. We don’t just look at the small intestine. We look at the large intestine, what’s going on there–are there over growths, parasites, imbalances, yeast overgrowth, et cetera. And we look at the full picture.

But if you are struggling with IBS, I highly encourage you to figure out what the root causes is. Even if you take medication that helps you feel better, whatever started it is still going on and can create some health issues long-term, especially when it comes to the gut. You guys have all heard me say, at this point, the vast majority of your immune system, 70 to 80% of it is located inside the gut. And the more and more research that comes out, there’s a gut everything connection. So, we really do want to make sure that you’ve got a good, nice, healthy gut.