SIBO vs. IMO Part I: What’s the Difference? 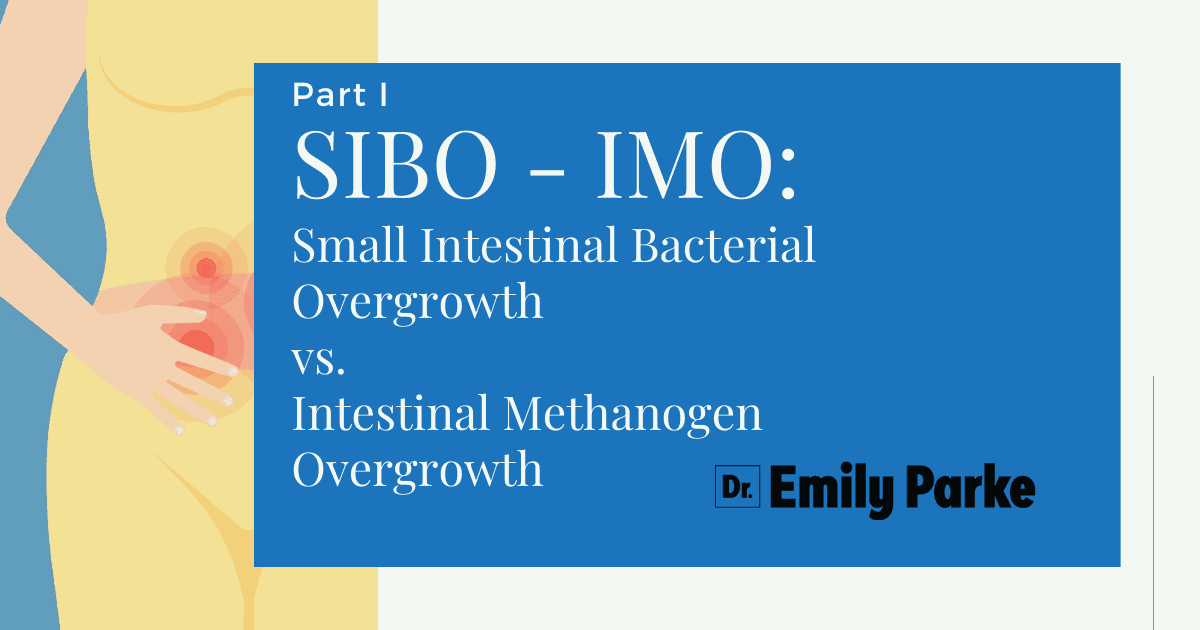 Hi, this is Dr. Emily Parke with your next Functional Health Minute. Today, I’d like to spend a couple minutes talking about SIBO or rather the two different categories that there are.  The old term SIBO used to encompass everything and it’s still commonly referred to as SIBO.  You can have high hydrogens on a breath test, and you can have high methane on a breath test. They have both traditionally been referred to as someone having SIBO and we would say it would be hydrogen dominant or methane dominant. However, the latest terminology puts SIBO, small intestinal bacterial overgrowth really only applies to hydrogens and/or hydrogen sulfide overgrowth, because we do know that from studies, that it is actual bacteria that is overgrown, and for most patients, it’s Klebsiella and/or E. coli.  Not everyone, but we know from studies that have been done, Dr. Mark Pimentel out at Cedar Sinai is a SIBO/IBS guru, and he’s pretty clear that most cases are caused by Klebsiella and/or E. coli. Now that is great information, but that still doesn’t tell us what exactly will kill those overgrown bacteria. So it’s great that we get to know that, that’s most likely what it is so that we can aim our treatment a little bit more specifically, but just like you can have resistance to any other infections, let’s say you had a strep throat and you would normally penicillin or a penicillin derivative works great for that, but it might not work for it 100% of the time, or you have a skin infection. You’re prescribed an antibiotic, most of the time it’s going to work, not 100% of the time.

So it’s the same thing with SIBO, except when we do a breath test, we just get to know, do you have high methane, do you have high hydrogens? And now with the newest and latest and greatest breath tests, we get to learn if there’s high hydrogen sulfides as well. So the term SIBO now currently really refers to hydrogen or hydrogen sulfide overgrowth. The term IMO, which is intestinal methanogen overgrowth, really refers to the old methane dominant SIBO. And the reason for the nomenclature change is because what causes methane overgrowth, is not technically bacteria, they’re archaea, specifically methanobacter smithii which is the one we know that can really contribute to methane overgrowth.

And we’ve already established that you know that the two are treated differently. There are certain themes that are common to both, right? Both still need motility support, both are going to need digestive support and good, healthy fiber intake, prebiotic fiber to help grow good, healthy gut bacteria. Both are going to need killing of some kind, whether it’s prescriptions or herbals. But which prescriptions and which herbals we use will change depending on what type of SIBO or IMO that you have. So this is Dr. Emily Parke with today’s Functional Health Minute.