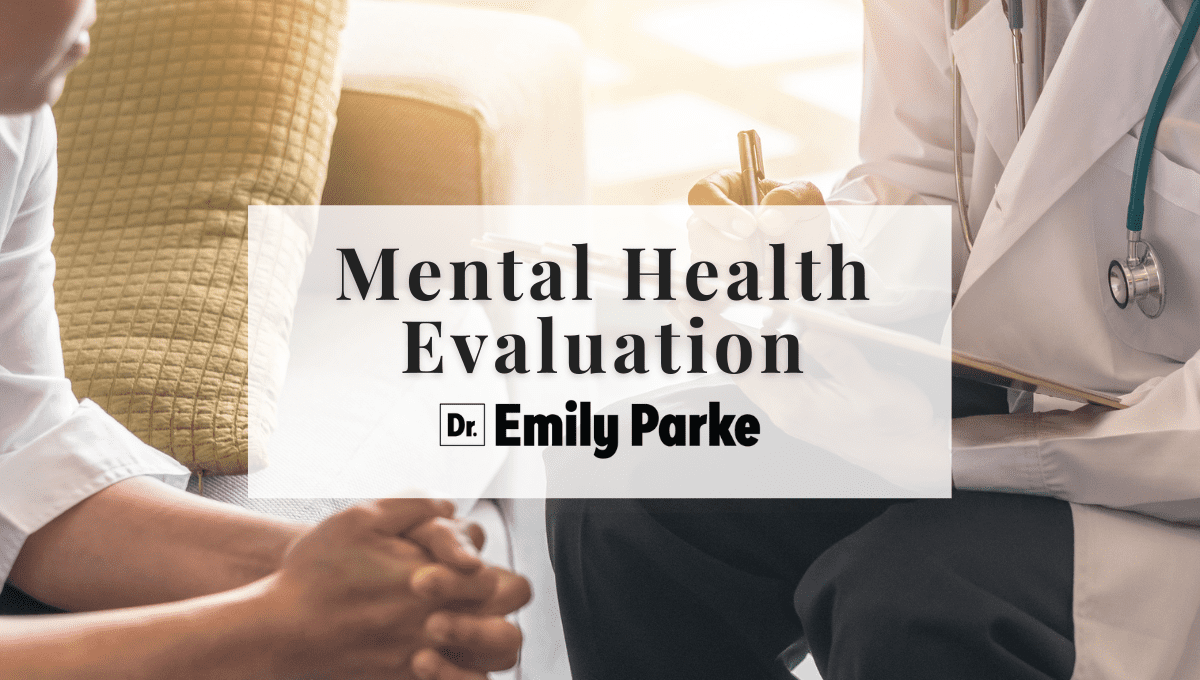 Hi, this is Dr. Emily Parke with your next Functional Health Minute. I’d like to talk a little bit about the evaluation of mental health disorders. So in functional medicine, of course, we like our questionnaires. We like to collect a lot of information before a visit. It really helps us be able to fully think about your case and to also formulate other questions that we might want to ask you during your visit. So of course we collect an MSQ or medical symptom questionnaire before every functional medicine visit. And that’s not specific to evaluation of mental health, but it is important because as we know, mental health issues can have manifestations of symptoms pretty much anywhere in the body. So we definitely want to know all of those that are going on.

When it comes to evaluating specific mental health conditions, I’m going to talk about depression first. My favorite questionnaire, because it’s been well validated, is something called the PHQ-9. It’s a questionnaire that we ask people to fill out and evaluate what the severity of depression is. If you score anywhere from a one to a four, that’s considered minimal depression. Five to nine is mild, 10 to 14 is moderate, 15 to 19 is moderately severe, and 20 to 27 is severe depression. So that helps us gauge where you’re at, and that’s important because we’ll be using it as a tool as we go along with whatever treatment modality we’re doing.

The next questionnaire I’d like to look at is the PTSD-5 and it basically asks a series of questions. It’s very short, but it asks a series of questions about if you’ve had an event that would be considered a trigger for PTSD. Pretty much if you have a score of three, especially if you’re female, the research size of a three or more tends to indicate that PTSD is likely. But definitely a four or more indicates that it’s very probable.

And then another questionnaire I like to collect is called the ACE and it’s Adverse Childhood Event Score. And we know that if an ACE score is four or higher, that means that person is at risk for chronic diseases and social and emotional problems as well.

So again, those are some of the questionnaires that we like to use in evaluating how someone is doing because it does become difficult to just talk about how are you doing? “Oh, I’m not doing so well.” What does that actually mean? How do we quantify that? And that’s actually a pretty big challenge in mental health overall. So the questionnaires are really good tools that help us determine where we’re going in the right direction.

All of these questionnaires are questionnaires that I collect as part of someone who’s being evaluated before ketamine infusions. And depending which ones are high or abnormal even, I’m going to collect those before every infusion. Because I actually want to know how you’re doing besides your verbal report on how you’re doing, which is also important. Collecting the scores is one of the most objective ways we have of knowing and assessing if things are working or not.

And what we’re looking for is at least greater than a 50% response for any treatment. So whether that’s ketamine infusions, or diet and lifestyle or supplements, whatever it is that we’re doing, we want to be able to properly evaluate a response.

This is Dr. Emily Parke with your Functional Health Minute.