The Proven Benefits of Exercise 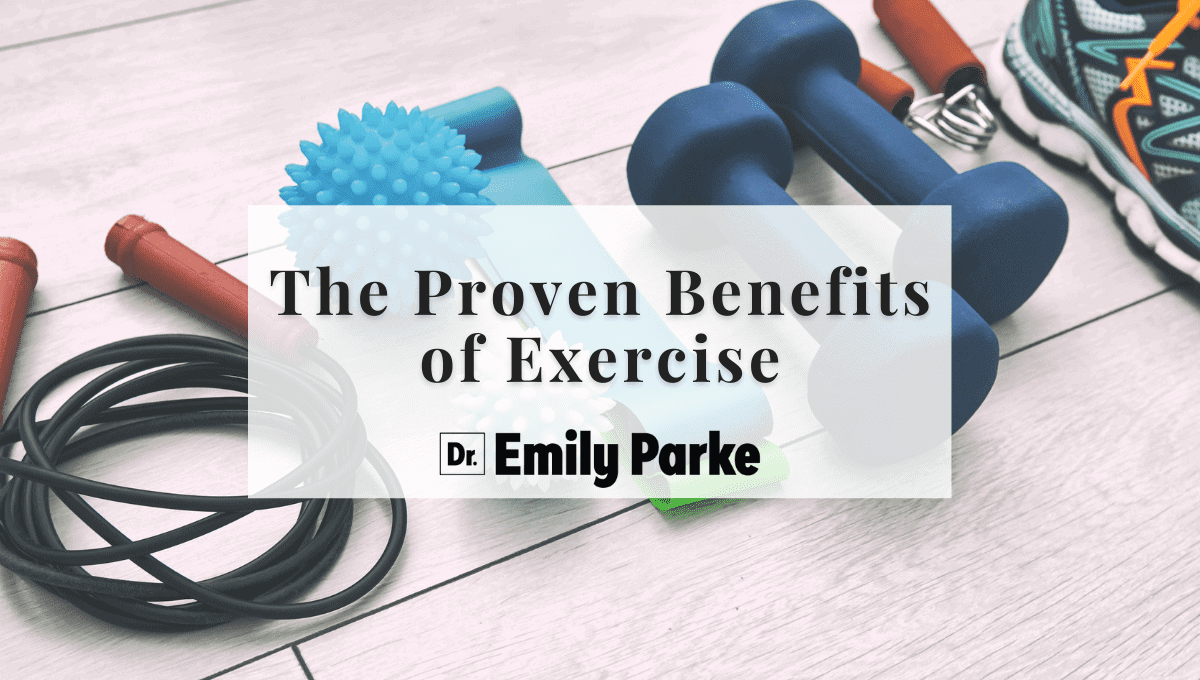 Dr. Emily Parke: Hi, this is Dr. Emily Parke with your next Functional Health Minute. Today, I’d like to talk a little bit about exercise and movement. So if you are not currently doing any exercise at all, then you’re going to want to start with some movement and some movement goals. So what qualifies as movement? Of course, walking. So getting your steps per day in, but it does not have to be walking. It could be anything else that requires movement. So it could be biking, swimming, rowing, gentle yoga, Tai Chi, Qigong. Anything that gets the body moving.

Now, if you don’t know what your current status is with movement, then I think it’s really great to get a fitness tracker or even a pedometer. So that way, if you’re doing steps per day, for example, you know, okay hey, I’m only doing 2,000 steps per day and you can set a reasonable goal like, “all right, my next goal is going to be 2,500 steps a day or 3,000 steps a day.”

Now, beyond that, because I get asked this question a lot, like what’s the best type of exercise? Honestly, it’s the exercise that you’ll do. It’s the exercise that you are most excited about. That’s where I like people to start because you want something that you are looking forward to doing. You don’t want something you’re dreading, you don’t want to do it just because someone told you to do it. You want to actually be looking forward to it and you want to benefit from it as well. If you’re new to exercise, you’re just starting to kind of get into it. You do want to find the right amount of exercise and the right type of exercise that makes you feel good. You should feel energized afterwards. You should feel, you should feel good. You shouldn’t do it to a point where you’re tired the rest of the day and you have to lay down. That’s maybe too much or it starts affecting things like your sleep and so on and so forth.

So you do want to find that sweet spot where you’re not doing too little, but you’re also not doing too much because that’s where you’re going to find the most benefit. Okay. So I want to kind of get into a few specific studies. Now there are thousands of studies on the benefits of exercise related to health, but there are a few I want to highlight cause I think they’re really important, especially for the aging population. So those of us as you start to get a little bit older, the importance of exercise movement becomes so, so important. So, the first study is a 2020 study and it was a really great study that looked at steps per day and it showed that for every additional 1,000 steps per day, it decreased all-cause mortality. So basically the higher the steps per day the lower your chances of dying of anything.

So that’s what all-cause mortality means dying from anything. And the same study also showed that the higher the steps per day there was a significant reduction in cardiovascular morbidity. So meaning, diagnosis of cardiovascular origin like heart attack, strokes, vascular disease and so on. And there was also a 2019 study that was kind of similar and that it showed that steps per day inversely correlated with arterial stiffness. So that’s arteriosclerosis, hardening of the arteries, right? So basically the more steps per day you did the more compliant/stretchy your artery stayed and that of course decreases your risk of cardiovascular disease and dying. Then there’s also a great study in 2017 looking at type 2 diabetes. And of course, no surprise there that exercise facilitated glucose regulation. So it made people’s glucose lower and more in control.

We would’ve guessed that if there wasn’t a study to show us that, right. So we do know that exercise definitely decreases cardiovascular disease and diseases of glucose regulation, like type 2 diabetes for example. But there were also some really great studies done on osteoporosis and something called sarcopenia. So osteoporosis is of course, when the bones weaken and can increase your fracture risk if you get there and then sarcopenia, it just means lack of muscle or you’re losing muscle, you don’t have enough muscle mass. Having a good amount of muscle mass, especially as we age is so super important to staying healthy. So there’s a really great series of studies that came out of the LIFTMOR Randomized Controlled Trial and I found a bunch of studies that were kind of between 2015 and 2018.

The Benefits Of Resistance Training

And one of my favorite studies showed that resistance training improves bone mineral density. So obviously great for osteoporosis prevention. And depending on where you live, if you have osteoporosis, you might want to check out, there are some facilities that are specifically designed to help with osteoporosis prevention, like specific exercises and here locally in Arizona, there’s these facilities called OsteoStrong and their whole goal is helping to improve bone mineral density, meaning helping to improve osteoporosis and osteopenia. Osteopenia is the first step. That means like you’re starting to lose some bone and then osteoporosis means there’s some significant bone loss. So resistance training, lifting heavy weights basically is really, really good for that. Lifting weights is also obviously of course, really good for building muscle and keeping the muscle that you have.

So there was a great study done in 2021 that showed that resistance training was highly effective in attenuating sarcopenia, so loss of muscle and frailty. And that’s really important because obviously if you have frailty, lack of muscle, your balance is going, if you could start losing balance and then this is where if you do have osteoporosis, obviously there’s going to be increased risk, risk of fracture. So there’s tons, I could keep going on the research studies, there’s tons of them out there that show the benefits of exercise. But if you were to ask me, what is my optimal recommendation for exercise? It will definitely include some resistance training. And I do recommend that if you’re new to it, you haven’t really lifted weights before. I do recommend, if you can do it at all, to get a really good high quality personal trainer, at least for a few sessions to help them build a program for you.

And so they can watch you to make sure that you’re doing the form properly. You’re not going to hurt yourself and so on and so forth. But resistance training doing some form of weight lifting is I think really, really important. But then aside from that, if you do that two or three times a week, the rest of the week, if you want to keep exercising, you would do whatever else makes you happy, right. That might be running, it might be yoga, if you’re me it’s rock climbing. You can do any exercise that you want to do that is in that moderate intensity zone. So this is Dr. Emily Parke with your Functional Health Minute.