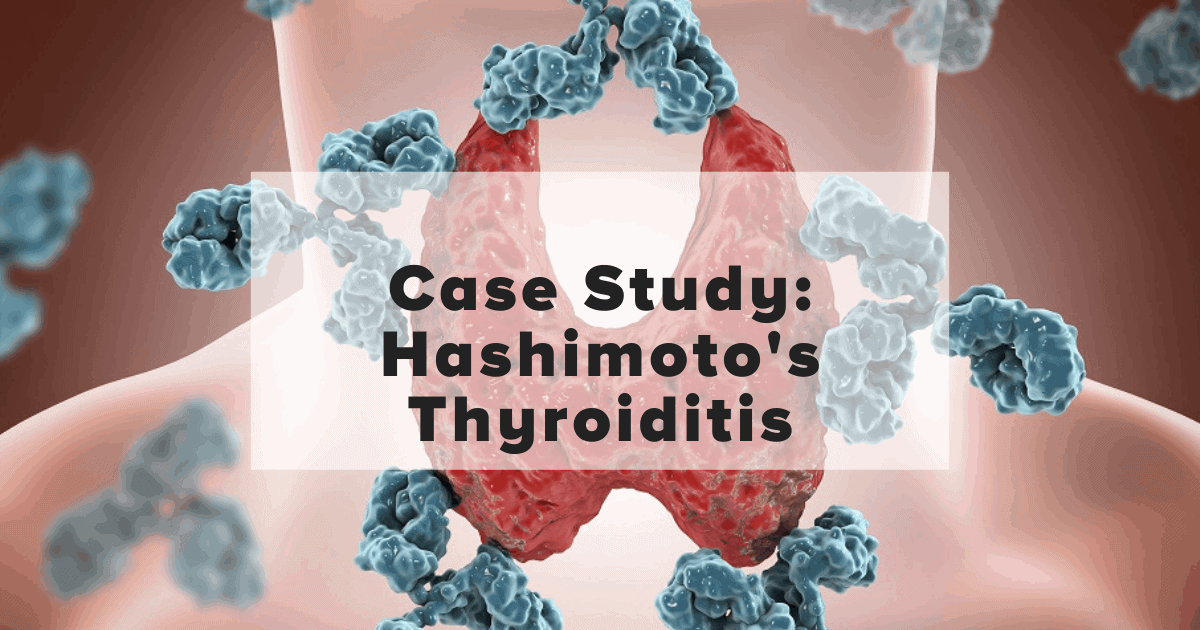 Hi, this is Dr. Emily Parke with your next Functional Health Minute.

So an initial laboratory evaluation on her blood work, her TPO thyroid antibodies were found to be close to 3,000. That’s obviously significantly high. And the other significant finding in her blood work was a low vitamin D. And we all know that vitamin D is so important for the immune system. It’s also important for brain health and bone health as well. D is actually a hormone, because there’s a receptor for it in every single cell of the body. Of course, part of the treatment protocol for her was replacing her vitamin D and working on getting those thyroid antibodies down, because we know that when thyroid antibodies are high, obviously your immune system’s activated, but those antibodies can create symptoms of all kinds and generally you’re not going to be feeling very well. You may have symptoms of fatigue, muscle aches, joint pains, headaches, mood changes including anxiety and depression and so on. So a lot of symptoms can happen when the antibodies are high. Her antibodies again were close to 3,000.

So we replaced her vitamin D, got her on a set of supportive supplements. I put her on things like a multivitamin, fish oil, a probiotic, some digestive enzymes. And I also put her on some magnesium to see if I could help with the muscle twitching and some systemic enzymes to see if we could help lower some of those circulating immune complexes floating around. And we of course placed her on a 30-day Paleo Autoimmune Protocol, and she actually stayed on it for much more than 30 days and was really pretty darn good about it, pretty strict.

Again, Hashimoto’s patient already knew she had Hashimoto’s, came in, found really high TPO antibodies close to 3,000 and a low vitamin D, replaced her vitamin D along with other supporting supplements, placed her on a Paleo Autoimmune Protocol diet. Four months later, she came in to see me after having labs drawn, and her TPO antibodies were down to about 150 from 3,000. And that’s really truly just with diet changes and replacing vitamin D and doing some very basic supportive stuff.

How did she do?

Her symptoms improved somewhat, but weren’t all the way gone. So we went true functional medicine style. We went ahead and peeled the next layer of the onion. So what did we do? We did some gut testing, because 80% of the immune system is located inside the gut. So we did a comprehensive stool study, we did an organic acids test, and we did a food sensitivity test. We did not do all three of these at the same time. We did one at a time. Her stool study was pretty non-remarkable. It did show that she could use some more beneficial bacteria and some more short-chain fatty acids because her beneficial bacteria was low. So we went ahead and treated that.

We did an organic acids test, which did have quite a few findings on it. Yeast overgrowth was one of her main issues, but she also had several elevated mitochondrial markers and some key nutrients that were deficient that didn’t show up as well on blood work, and that’s vitamin B12 and vitamin B2 for her. So we did go ahead and replaced those. We treated her yeast overgrowth. And because the yeast overgrowth was a problem, she also had some high oxalates. So by treating the yeast, we helped reduce the oxalates. And if you know much about oxalates, you can actually get strange sensations and pain symptoms and GI symptoms as well, particularly loose stools and an upset stomach. So we went ahead and treated her yeast overgrowth, her oxalates, and her nutrient deficiencies to also improve her mitochondrial dysfunction.

We did some gut healing, of course, with her too. We needed a good gut healing protocol. And the last thing we did was look at her food sensitivities, because as things continued to improve, she still had some kind of baseline underlying muscle twitching issue. So we went ahead and did a food sensitivity panel and it did show a good handful of things. She was very sensitive to things like dairy and soy and corn, and a couple of the seeds, one of the gums and a small handful of fruits and vegetables. So it wasn’t a test that came back that was like, oh my gosh, there’s huge intestinal permeability or leaky gut going on, but definitely, there were some foods she had put back in the diet that seemed to not agree with her and create food sensitivity. So we went ahead and further took that out.

Now, the initial case presentation was almost five years ago, and I can tell you that her TPO antibodies have remained very low this whole time. They will kind of wax and wane a little bit, but her most recent set of labs, it’s around 150.

Now, here’s the thing. Is this person 100% strict AIP the whole time, her whole life? No. Just like most people, she’ll go through periods of time where she’s very strict about it and feel… What happens is we all start to feel a little bit better, and then we’ll kind of get a little bit more lax on it, or life happens, stresses happen, families in town, so on and so forth. You might get a little loose for a little while and then kind of get back to it.

So this person did a really strict AIP reset at the beginning, which really helped me to get those thyroid antibodies down and has maintained an AIP/Paleo lifestyle for the most part. She now has her own version of what works for her.

I wanted to present this case to highlight what it typically might look like for someone with Hashimoto’s. For most patients, it’s not going to be a quick, easy, three-month gut healing protocol and you’re good to go. Most patients with autoimmune disease, when you start working with a functional medicine provider, unless it’s just started and it’s very easy to turn around, but it definitely takes time. And I will tell you on average to get where you really need to go, it’s a year or two of really kind of work in the plan and protocol. Again, unless it just happened to you and it’s a very obvious one or two things that have contributed to your autoimmune disease turning on, and we can turn that around very quickly. I actually have seen many of those cases in this practice where patients have low level thyroid antibodies and we’re able to nip it in the bud and they never come back, which is amazing. That’s like the best case scenario.

But for patients that have had Hashimoto’s for a long time, just like this patient, before even coming to see me, it doesn’t mean you can’t do nothing. Look, we got antibodies down from about 3,000 to hanging out around 150-ish. That’s pretty great. That’s a huge reduction in antibodies. So there’s always some headway to be made. It just depends on who you are and how long you’ve had your autoimmune disease going on and what other factors you have, but it is possible to make a difference with functional medicine.

This is Dr. Emily Parke with your Functional Health Minute.