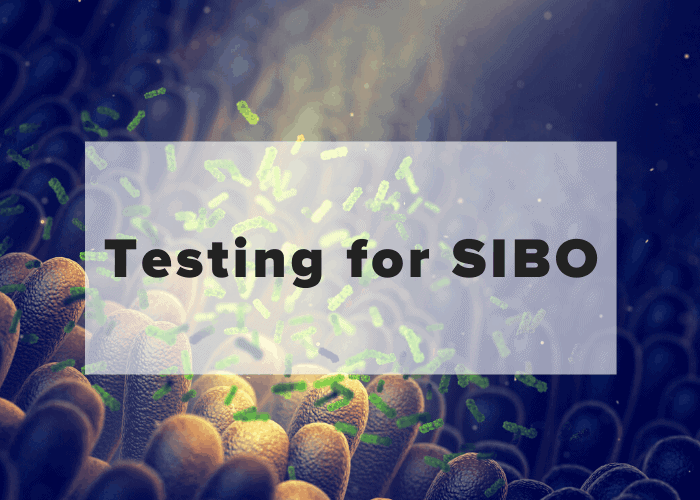 Hi, I’m Dr. Emily Parke with your Functional Health Minute. Today I would like to continue with my gut testing series. The next test I want to go over is a test for something called SIBO, which stands for small intestinal bacterial overgrowth. I have previously done a video interview on it that was quite comprehensive if you want to get into the details of that and I’m likely to do on the updated video in the future. But right now I want to stick to the testing and how it’s done.

So with SIBO, since it is small intestinal bacterial overgrowth, there’s not a great way to directly look at what bacteria are in the small intestine. Because even with GI scopes, you can only get to the first couple of inches from above, which is the first part of this small intestine, which is the duodenum. You can get into this small portion of that, and with the scope from below, you can only get into the last couple of inches called the terminal ilium. So there’s all these several feet of the small intestine that are kind of uncharted territory, so to speak. We really don’t know what’s in there.

Now, caveat, there is not a perfect test for SIBO. This is the best we have. So, you know, proponents of doing the glucose breath test say, “Well, I’d rather just get the first part of the data and then not have too many positives and then under-treat basically. So then there’s the lactulose breath test and the critics of that test say, “Well, you get too many false positives and so you’re going to end up over-treating people that potentially didn’t have SIBO.”

In functional medicine though, since we take a lot of time collecting data on symptoms and talking to our patients, really kind of delving in with how they’re feeling, I’m not testing everybody, obviously. I’m only testing patients that have symptoms that would lead me to test for SIBO. So gas and bloating, diarrhea, constipation. And then there’s symptoms outside of the gut too that SIBO can contribute to. But, by and large, there’s a subset of symptoms that kind of leads us to say, “Well, maybe we should go ahead and test for SIBO along with risk factors for SIBO.”

So if patients have symptoms and risk factors, then we’re likely to do a breath test. And if you use the three hour lactulose breath test, just like what is being done out at Cedars-Sinai by Dr. Mark Pimentel, he’s one of the IBS gurus and researchers. He’s actually developing a new version of a SIBO breath test, which hopefully will be out shortly. I’m really excited about that.

But anyway, I’m going to show you what a breath test looks like. It’s very easy to do, but it’s kind of annoying because you have to set an alarm and collect your sample every 20 to 30 minutes. But it’s easy to do. All you’re doing is blowing in this little tube, collecting your breath because it is called the breath test, and the tubes are specially lined to catch hydrogen and methane gases. And that is what the three hour lactulose breath test is testing. It’s looking at hydrogen levels and methane levels.

So if you’ve got bacteria that are overgrown and producing methanes, I’m going to see that on the test. And those patients tend to be more constipation dominant. If you’ve got bacteria that are overproducing hydrogen gases, those patients tend to more diarrhea dominant. Although patients could have a combination of both and the symptoms don’t necessarily match. Methane and hydrogen don’t always match up with their exact symptoms, especially if there’s a mixed picture.

I’m going to show you an example of a SIBO breath test. This is one test and I wrote lines on. I’m going to explain to you, on how other tests might look just for just for kind of completeness. So this is a three hour lactulose breath test and this test happens to be negative on this patient. So that the actual tests for this patient is on the bottom and everything looks great. So the open bubbles are hydrogen and they’re like, “It’s pretty flat.” And the diamonds, the black diamonds are methane and it’s pretty flat, and you can see the peak numbers are very low, and so this person had a negative breath test.

Now, if this was a positive breath test … so I kind of wrote in pen here. If this was a hydrogen dominant case of SIBO, what you would see is as you go along the samples, you would see it start to rise, rise, and then there is a thing called a classic double peak. That’s this right here. It doesn’t happen all the time- you won’t see it 100% of the time, especially depending on the patient’s motility. But you would see a significant rise in the hydrogen levels. And so that would be a hydrogen dominant case.

And there’s methanes, I kind of drew these open diamonds here. So typically when there’s methane going on, even your starting level of methane might be a little bit higher, so it might not be zero and then it will just continue to climb. Methane levels, anything over 10 at any point during the test is considered positive. So this is kind of just a brief summary on what the results of the SIBO breath tests look like. In a future video upcoming, I will get into what the treatment methodologies are for SIBO, the latest information that I know, and I am always trying to stay up to date, especially in following Dr. Mark Pimentel and some other SIBO gurus and specialists around the country, since it is an evolving field and we don’t know everything yet. This is Dr. Emily Parke with your Functional Health Minute for today.