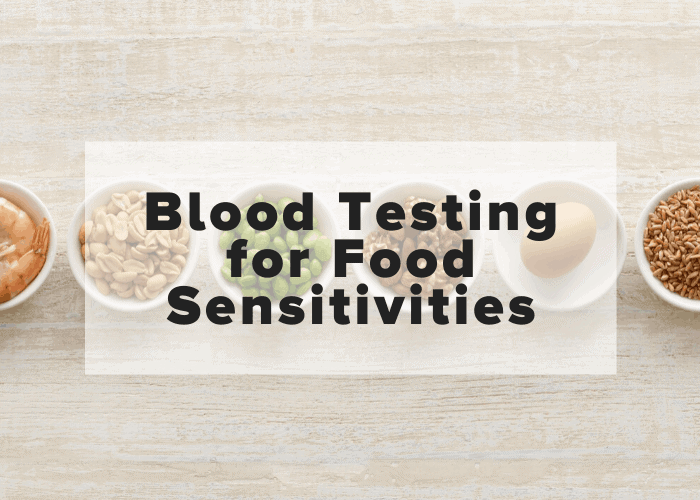 Hi. This is Dr. Emily Parke with Your Next Functional Health Minute. I’d like to continue my series on Functional Medicine Advanced Testing. The next test I’d like to go over is kind of in the gut series of testing. However, food sensitivities can create symptoms outside of the gut too. It can actually give you symptoms from head to toe, literally. It could be muscle aches, joint paints, fatigue, or mood changes, or skin rashes. And, of course it can be gut symptoms like gas, bloating, diarrhea, constipation, abdominal pain, etc…

But, I want to go over a couple of different food sensitivity tests. There are so many different food sensitivity tests out there on the market, and there are two companies that I really trust, and I really trust them because they’re using the gold standard for testing called the ELISA Method. And both of these companies actually split test, which means they run the test more than once to verify results. And so, for those two reasons I like the two companies Cyrex, and US BioTek. There are a couple differences between the two companies, and I’m going to show you a couple of examples of the results.

Now, there are so many food sensitivity testing companies out there, and a lot of times you’ll hear people talk about all food allergies, and I did do a previous Functional Health Minute explaining the difference between food allergies, food sensitivities, and food intolerances because they are three separate categories. But, what I’ve seen a lot in clinical practice is patients coming in and saying, “Oh yeah, yeah, I had the food allergy test. I have all these allergies,” and then come to find out they didn’t really get an IgE food allergy test done, they actually got some type of food sensitivity testing done. And, that can be done through all different parts of the immune system. Most commonly, companies will use IgG and just IgG by itself. But, there are other companies doing tests called like mediator release technology, and looking at other parts of the immune systems response too. but again, I chose Cyrex and US BioTek to work with because they both use the ELISA Testing method, which is the gold standard, and they split test as well. They’re both two really good companies.

But, let me go over their test results because there are couple differences between the two, and there may be some reasons why one of the tests might be right for you versus the other. The first test I’m going to go over is the one from Cyrex. When I do food sensitivity testing through Cyrex, I do their two tests. There’s one called Cyrex Array 4, and one called Cyrex Array 10. Now, that’s assuming that I’ve already had my patient do a 30 day reset, not just eliminating gluten let’s say, but a complete 30 day reset with reintroductions, we’ve already tested their gut, and we’ve treated what’s going on inside the gut.

That’s the right time to do a food sensitivity test, is after the gut has done a little bit of healing, otherwise you’re going to get a test that shows up with a bazillion positives on it, and it’s just because there’s intestinal permeability or leaky gut going on still that you need to heal. And the solution is not to avoid the majority of foods that show up on your panel, it’s actually to heal and seal the gut. I will still have people eliminate the ones that are the most highly reactive because they’re likely to feel better during that time.

If someone has not eliminated gluten, or they really want to test if their immune system has a problem with gluten or not, then there’s another additional array that I’ll add through Cyrex to look at the response to wheat and gluten. But, generally if someone has been wheat free for a period of time, I’ll end up doing Cyrex Array 4, which are the gluten cross reactors. A lot of the common gluten free products have other gluten free grains in them, and then other non-grains that are even considered paleo. And, Array 4 does a really nice job of looking at those. There’s going to be grains like teff will be in there, amaranth, quinoa, the other commonly used gluten free product grains. And then, the other non-grains like cassava flour for example, or tapioca is another great example. And so, looking at those can be pretty helpful.

This test, so I’m going to show you an example. This is Cyrex Array 10, and so the other test, the Array 4 looks just like this except it just has the gluten cross reactors on there. It’s a very easy test to read, and what Cyrex does is they actually combine IgG and IgA. IgG is the biggest part of the immune system, and IGA is your mucosal immune system, so meaning basically anywhere from your nose, your mouth, your throat, your esophagus, your stomach, small intestines, large intestine. Basically, from nose all the way down, and your GI tract. Your IgA is the mucosal immune system, the first response, the first chance your immune system has to respond to something.

They combine IgG and IgA, and then they give not only a numerical value, but they also tell you, it’s very easy to read. Green, yellow, red. Green means you’re in the green, right? You’re not responding highly to that food item. And then, yellow means it’s equivocal, meaning you’re getting close. And then, red means there’s definitely an issue, or a problem. One of the cool things about the Cyrex test is they will actually fraction out whether it’s cooked or raw when they’re doing their foods, which is unique to them. I don’t know of any other company fractionating it out quite like them with cooked and raw, so that’s actually helpful. And then, there are a few additional items that Cyrex has that the other company I like, US BioTek, does not, like Array 4 with the gluten cross reactors. There is some overlap, but there are certain ones that Cyrex has that they don’t.

Next I’d like to show you the US BioTek test and explain the differences there. This is kind of what a sample report looks like, and this test has, this person did all three kind of options for food sensitivity testing, so IgG, IgG4, and IgA. What’s cool about US BioTek is they actually fractionate those out, and so at the top key here, you can see that there’s three different values, right? Your plain, your clear is IgA, and then your gray box is going to be IgG, and then your dark gray box is IgG4.

IgA, as I previously explained, is your mucosal immune system, so patients that have any type of issue with a mucus membrane of any kind, like chronic sinusitis, or pharyngitis, or esophagitis, or anything mucus membrane related, respiratory tract infections, those kinds of issues. Then, it really might be helpful to look at the IgA fractionated out by itself. And then, the IgG4 is really useful, especially in patients that have esophageal symptoms, and have esophagitis, which you would actually find out by doing an endoscopy. There’s a really good study showing that, eliminating the foods that show up on IgG4 testing really significantly help resolve in esophagitis. So, that’s one of the other reasons why I will use a US BioTek test specifically, because I do get the information from there.

This person’s test really didn’t have much going on in IgA or IgG4’s, it’s just the light gray bands, and so those are just IgG food sensitivities, so that’s the biggest part of the immune systems response. And as you can see, there’s a common theme here, the dairies, anything in the dairy category is not great for this person. And then, if you kind of start looking at some other things, all the proteins are fine except for eggs. Eggs and dairy are unfortunately two really common food sensitivities. But, most of the other items in the protein category, in the fish look really good, there’s just a few there. This person has some reactivities to some spices and flavors which is another cool thing that US BioTek looks at. Cyrex does also look at spices as well, and additive, and some thickeners and what not.

And then, the next category looks at legumes and vegetables. And then, the next category there’s fruits, and then the grains, and then miscellaneous type items. Now, this is US BioTek’s 144 Sensitivity Test. They actually just recently came out with a 208 Food Sensitivity panel that fractionates out further things, like for example on this panel they have a measurement for curry spice, which interests me because turmeric is part of curry, and I prescribe turmeric or curcumin quite frequently. And so, obviously if someone has a sensitivity to that I would like to know, and so on their new 208 panel they actually did fractionate out turmeric, and there’s obviously a good handful of additional tests that are on the 208 panel versus the 144 panel.

Why would you want to do food sensitivity testing? As I was kind of saying at the beginning, if you’ve got any GI symptoms of course that are unresolved with a standard food eliminate and reintroduction, and as you guys know I like to use the paleo construct to get people on real food, and eating mostly plant foods. After the food elimination process, and testing the gut, and doing some treatment there, and some healing and sealing of the gut. If someone still has reactivities to food or symptoms that are unresolved, then that is the time that I will choose to do the food sensitivity testing.

Another time I’ll do it is when someone has a really hard time complying or following through on an elimination food plan. If they’re like, “You know what? No way, it’s just not going to happen right now, but I really want to know what my hot buttons are, what are the foods that create the most symptoms for me.” Then, I will go ahead and order a food sensitivity test. If you’re looking to take action now to treat the root causes of your symptoms, I suggest signing up for my 7 Weeks to Your Healthiest Self Master Class. Learn more about that here. I hope that helps clear a little bit up about food sensitivity testing, this is Dr. Emily Parke with Your Functional Health Minute.