Is Your Diet Causing Your Pain? Plus 7 Foods that Fight Pain 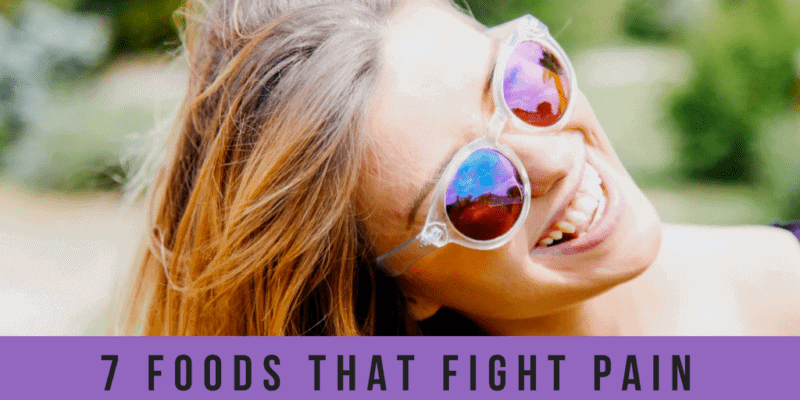 It’s estimated that 50 million American adults suffer from significant chronic pain. That is an astounding number of people who are suffering from debilitating pain!

Pain that prevents them from doing the things that the love.
Pain that impacts their quality of life.

As a country, we consume 99 percent of world opioid supply. And as you probably know, opioid abuse, as well as accidental opioid overdose, has become an issue of epidemic proportions, killing one American every hour.

The discussion of chronic pain has moved beyond the realm of unease to serious concern.

Four major factors that I believe are contributing to chronic pain in America are:

Most of us understand that lifestyles which lack movement can cause weight gain and weak muscles, leading to a cascade of health complications including increased pain – basically, “if you don’t use it, you lose it.”

What might be news to you though, is that the foods you’re eating could be directly causing your pain.

Pain, by definition, is “due to the direct effects of mediators, either from initial damage or the resulting inflammatory response itself.” Meaning that inflammation is what causes your neurons to fire and tell your brain, “hey, something’s not right here – time to investigate.”

Typically, in pain caused by an injury for example, we feel it because the tissue swells and increases blood flow to the area. That’s how we come to notice it.

So, if pain is caused by inflammation, isn’t it a pretty logical conclusion to say that inflammatory foods could cause chronic pain responses?

How What You Eat Could Be Causing Your Pain

We actually know that inflammatory food can cause chronic pain, it’s why anti-inflammatory diets are gaining traction.

And since we are all about finding health solutions here at Arizona Wellness Medicine, I’d like to show you some of the best foods you can incorporate into your diet to reduce overall inflammation and set you on the path to a better existence.

Imagine waking up less stiff, being able to play with your kids or grandkids more easily, and best of all – not having to even consider what you can or can’t do because of your pain.

I want you on the path to a pain-free life and I truly believe one of the best ways to get started is through eating anti-inflammatory foods and eliminating inflammation causing foods.

Between eating good pain-fighting foods and eliminating the three pain reducing foods recommend below, you’ll likely be surprised at what a change in diet can do for you and your pain. First, let’s take a look at foods that are great for reducing pain.

As a country, we need to up our omega-3 intake and reduce our omega-6 consumption. The best way to do that is through eating more of these foods (listed from highest omega-3 content to lowest):

Foods that are high in omega-6s and should be avoided include conventional beef, vegetable oils, peanuts, and processed, packaged foods.

On top of that, EGCG also has antioxidant properties, which is a huge bonus. The antioxidants scavenge those nasty free radicals that can cause DNA damage. Now you see why health gurus rave about the benefits of green tea? It’s packed with beneficial properties.

Check this out: One study found that people who ate hamburgers with a slice of avocado on them showed less markers of inflammation than those who ate a hamburger without avocado.

In addition to eating anti-inflammatory foods there are also foods you should stop eating immediately if you’re suffering from chronic pain.

I hope this guide to pain reduction through a better diet was helpful. I want to see you achieve a better life, and I really believe it’s possible for nearly everyone! If you know someone who would benefit from an anti-inflammatory diet, I encourage you to share this article with them so they can start their journey to pain-free living today.